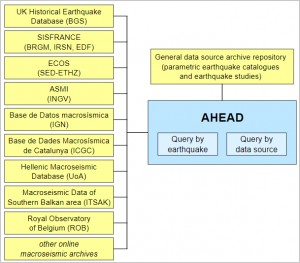 AHEAD, the European Archive of Historical Earthquake Data 1000-1899, is a distributed archive aiming at preserving, inventorying and making available, to investigators and other users, data sources on the earthquake history of Europe, such as papers, reports, Macroseismic Data Points (MDPs) in different scales (EMS-98, MSK, or MCS), and parametric catalogues. The AHEAD general repository rely on independent, regionally managed data archives. At present, eight regional, online macroseismic archives team up in AHEAD covering Italy, France, Switzerland, Spain, Catalunya, Belgium, and Greece. Data on areas not covered by a regionally managed archive is retrieved by checking out reliable and published scientific literature. AHEAD inventory seismological data organized either in regional databases or in scientific papers, and does not archive historical sources (e.g. manuscripts, letters, dispatch) examined by the compilers of these studies. A great effort is being put in identifying and clearly marking fake earthquakes, events wrongly reported as earthquakes in catalogues. Fake earthquakes are due to a variety of reasons, for example can refer to a natural event such as landslides but interpreted as an earthquake, or generated by the misinterpretations of historical records, most commonly due to calendar problems or unclear historical reports not correctly interpreted by investigators that did not consider their historical context. AHEAD can be queried by earthquake, to access the information related to each individual earthquake, or by data source, enabling access the earthquakes for which each seismological study provides information. The query by earthquake allow the user to visualise the full earthquake list or a portion of it, filtered by time-window, magnitude class or number of MDPs, or entering a custom geographical selection. Once selected, users access all archive data on the earthquakes, such as parameters (location and magnitude) from catalogues. The preferred European catalogue in AHEAD is SHEEC 1000-1899 (Stucchi et al., 2012). Macroseismic data from supporting seismological studies is also visible, and users may easily plot and compare the different interpretations available. The query by data source introduces the user to the list of archived seismological studies that contains data on the inventoried earthquakes. Each study can be clicked, giving access to the PDF of the original text when available or when the copyright allows for it, or a link to the publisher is provided when the PDF is not available. For each seismological study is also reported a list of considered earthquakes and a map showing their epicentres. Following some pioneering attempts in the early 1990s, AHEAD was initiated and built up, for the European earthquakes between 1000 and 1899, in the frame of the EC Project NERIES, Network of Research Infrastructures for European Seismology (2006 and 2010). INGV Milan coordinated the NERIES Task NA4 called “Distributed Archive of Historical Earthquake Data”, and then continued the development during the EC Project SHARE, Seismic Hazard Harmonization in Europe (2009-2012), aimed at compiling an European earthquake catalogue called SHEEC using AHEAD data. SHEEC (1000-1899) was aimed at compiling earthquake location, moment magnitudes and related uncertainties using homogenous procedures for the entire continent. After the end of SHARE, AHEAD has been maintained and further implemented by INGV in the framework of the EC initiative EPOS, aimed at setting up the European Plate Observing System (2010-2012) a new ERIC, European Research Infrastructure Consortium.