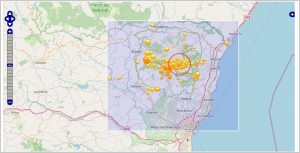 The Etnean instrumental catalogue collects all the recorded earthquakes by the Permanent Seismic Network of the INGV-OE since Agoust 19, 1999. Earthquakes reported into the catalogue are localized by the analyst staff, that is, a group of people working in the seismological division, belonging to the INGV-OE. In order to produce a reliable product for the scientific community, localizations are carried out according to uniform scientific criteria shared among all analysts. Hypocentres and magnitudes of local earthquakes are obtained by means of software tools developed by INGV-OE and based on Hypoellipse 2.0 computer program. Depending on the area to which the station belongs, the model of crustal velocity used is Hirn et al., (1991) for the Etnean area, or Jeffreys and Bullen (1967) for the Aeolian archipelago. The catalogue contains, for each earthquake, the hypocentre, the magnitude, the origin time and the toponym.