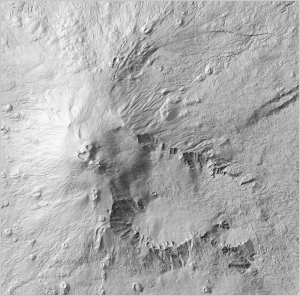 We present a Digital Elevation Model (DEM) of Mount Etna obtained from tri-stereo Pléiades data acquired on 18 December 2015. The 3D processing of the tri-stereo Pléiades 1A imagery was performed using the free and open source MicMac photogrammetric library (http://micmac.ensg.eu) developed by the French IGN (Institut Géographique National), and took advantage of Ground Control Points (GCPs) acquired at Mt Etna. The best result obtained is a 4-meter resolution DEM spanning an area of about 16 × 15 km, which covers the summit craters and a portion of the eastern flank of the volcano, including most of the Valle del Bove area. The highest point of 3,367 m is on the south-west rim of the North-East Crater (NEC), while the South-East Crater (SEC) and the New South-East Crater (NSEC) reach an elevation of 3,336 and 3,325 m, respectively. This 2015 DEM was validated against the 1-meter 2005 DEM resulted from digital photogrammetric mapping (Gwinner at al., 2006). The standard deviation of the height difference between the two DEMs in the area not covered by volcanic deposits, emplaced between 2005 and 2015, is 2.95 m. This difference can be partly due to vegetation and/or urbanization. The DEM is provided as GeoTIFF raster (dem_2015_4m.tiff), using the WGS84 datum and the UTM projection, zone 33 North (EPSG 32633). Missing areas are due to snow cover, very low texture and/or terrain shadows. Pléiades data were available through the Space Volcano Observatory with Pléiades (SVOP) project coordinated by Pierre Briole (http://volcano.iterre.fr/svo_projects). We are grateful to Olivier Galland, Luc Girod and Christopher Nuth for their assistance with the use of the MicMac software.This work was developed within the framework of the Laboratory for Technological Advance in Volcano Geophysics (TecnoLab) of the INGV in Catania (Italy) and was partially supported from the "Advanced tools and methods for computational fluid-dynamics"(ATHOS) research programme.