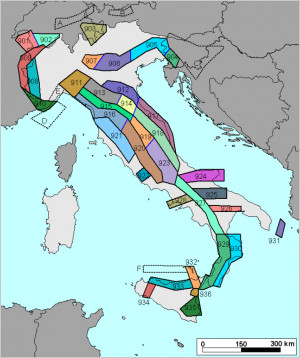 ZS9 is a seismic source model for Italy to be used as an input for country-wide probabilistic seismic hazard assessment (PSHA) in the frame of the compilation of the national reference map. ZS9 is made out of 36 zones where earthquakes with Mw > = 5 are expected. It also assumes that earthquakes with Mw up to 5 may occur anywhere outside the seismogenic zones, although the associated probability is rather low. Special care was taken to ensure that each zone sampled a large enough number of earthquakes so that we could compute reliable earthquake production rates. Although it was drawn following criteria that are standard practice in PSHA, ZS9 is also innovative in that every zone is characterised also by its mean seismogenic depth (the depth of the crustal volume that will presumably release future earthquakes) and predominant focal mechanism (their most likely rupture mechanism). These properties were determined using instrumental data, and only in a limited number of cases we resorted to geologic constraints and expert judgment to cope with lack of data or conflicting indications. These attributes allow ZS9 to be used with more accurate regionalized depth-dependent attenuation relations, and are ultimately expected to increase significantly the reliability of seismic hazard estimates.