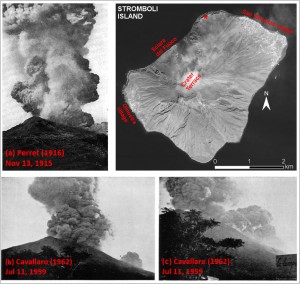 Historical catalog of Major explosions and paroxysms at Stromboli (Italy)

This is the dataset of the major explosions and paroxysms record at Stromboli from 1879 to 1960, as reconstructed through a detailed review of scientific literature of the last ca. 140 years. The catalog includes the calendar date and phenomena descriptions for 120 explosive events, of which 30 were paroxysms. We summarized the event information content in five columns - (i) noise and earthquakes, (ii) ash plume, (iii) large ejecta, (iv) PDC and tsunami, (v) lava flows. Where possible, the extracts contained the description of any volcanic activity at least one month before the eruption and one month after. The catalog also includes a sequence of extracts from the original literature sources that helped us in the complex characterization of the less recent events. When that was possible, we relied on the detailed definition of major explosions and paroxysms in [Rosi et al., 2013, Geol Soc Lon Mem 37, 475–492]. In other cases, we had to utilize the original definitions in [Barberi et al., 1993, Acta Vulcanol 3, 173-187], due to the lack of enough quantitative information in the historical sources. In general, while we reached a consensus about all the paroxysms, several possible major explosions remained not clearly distinguishable from particularly violent episodes of Strombolian activity. Thus, our historical record also includes the quantification of the main sources of uncertainty, i.e. the possibility of major explosions of uncertain characterization because of insufficient information. We thus categorized as uncertain 45 major explosions.